Although I have written about this in Transport Topics and other transportation magazines, the subject of a diabetic driver is still a topic of interest.
Frankly, there are many drivers who have health problems due to poor diet and lack of exercise. If this is not an issue you have addressed yet, it certainly will be an issue in the future.
The federal regulations are clear about diabetic drivers who are insulin dependant. They cannot be medically certified; however, in recent years some exceptions have been enacted that may allow an insulin-dependant driver to get a waiver if very strict protocol are followed.
What about the present employee driver who is borderline diabetic or who must take medications other than insulin?
What about a applicant who is diagnosed with diabetes?
Suppose a driver is diagnosed with diabetes and denied a medical certification even for a day? Although the evidence may be relevant, it is could be extremely prejudical and misleading.
One time I had case in which the plaintiff’s attorney tried to have the POST-ACCIDENT medical condition of the driver admitted into evidence. Essentially, his theory was that if the driver was de-certified six months after the accident then he was more than likely not medically qualified at the time of the accident.
Fortunately, the driver was de-certifed for only day and he was NOT insulin dependant; however, we had a battle over the introduction of this evidence even though there was no evidence that driver’s diabetes mellitus contributed to the accident  or that he was not properly certified to drive at the time of the accident.
In fact, the disease was subsequently controlled with medication (not insulin) and the driver  was re-certified to drive the 18-wheel tractor trailer rigs on after ONE day. However, at the time of the accident several months earlier, he was fully certified.
Dr. David Fletcher of Safeworks in Illinois was very  helpful in evaluating and giving us an opinion that the medical certification procedure used before and after the accident complied with federal regulations. The opposition tried to argue the technician who performed the initial medical certification was not properly certified, the procedure used was not proper and the results were faulty. Yet, at the same, they argued that the subsequent medical evaluation WAS proper and should be admissible.
49 C.F.R. § 391.41 governs the physical qualifications for drivers:
“§ 391.41.(b) A person is physically qualified to drive a commercial motor vehicle if that person–
(3) Has no established medical history or clinical diagnosis of diabetes mellitus currently requiring insulin for control;”
Accordingly, a driver is physically qualified to drive a commercial vehicle if that person has no established history or clinical diagnoses of diabetes requiring insulin to control the diabetes. As disclosed by the medical records obtained by the plaintiff’s counsel, our driver’s  diabetes did not require insulin and therefore, he was re-certified to drive.
We successfully argued that all evidence regarding the driver’s diabetes and driver medical de-certification after the accident should be excluded because there was no link between the accident and the driver’s  diabetes or the driver’s  medical certification. Obviously, the only purpose to admit the evidence of diabetes or the subsequent driver medical certification would be to confuse the jury as to the primary cause of the accident.
In the last few years there have been some important changes in the laws about drivers with diabetes. in 2005, President George W. Bush signed into law, that there is no longer any need to show previous commercial driving experience, even if a potential driver is on insulin.
However, there are still strict guidelines to be granted the exemption under Diabetes Exemption Program. For example, a  driver must be  evaluated by an Endocrinologist and an Ophthalmologist or Optometrist, and the exemption form has areas that must be filled out by the doctors.
The FMCSA must grant or deny an exemption within 180 days of receiving the  application for an exemption.
According to the law passed by Congress, individuals with insulin treated diabetes will have to demonstrate that they have control of the diabetes while on insulin.
Drivers with Type 1 diabetes must have been on insulin for two months before they can apply for the exemption.
Drivers with Type 2 diabetes are required to have been on insulin for at least one month.
I know it’s corny, but “keep on trucking.” 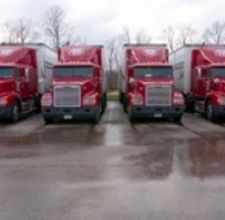 Diabetic Drivers of 18-wheelers2011-06-152017-05-04https://perkinsfirm.com/wp-content/uploads/2017/01/perklogo-white.pngPerkins & Associates Attorneys at Lawhttps://perkinsfirm.com/wp-content/uploads/2017/01/perklogo-white.png200px200px
Recent Posts
Quick Links
Contact Info
Popular Posts
Material presented on the Perkins & Associates, L.L.C. website is intended for informational purposes only. It is not intended as professional advice and should not be construed as such. The material presented on this site is included with the understanding and agreement that Perkins & Associates, L.L.C. is not engaged in rendering legal or other professional services by posting said material. The services of a competent professional should be sought if legal or other specific expert assistance is required. This website is not intended to be advertising and Perkins & Associates, L.L.C. does not wish to represent anyone desiring representation based upon viewing this website in any state or jurisdiction where this website fails to comply with all laws and ethical rules.
Excluding Evidence of Wealth of Trucking CompanyDiscovery, Litigation