Seriously? Trucking Company getting a DAC report is unreasonable?

A few years ago, I was defending one of several 18-wheelers involved in a multi-vehicle accident. Honestly, my client was not at fault or at least had minimal fault; however, in Louisiana, even if a party is deemed one percent at fault, he must pay one percent of the damages.
So, if a claim is potentially worth $15,000,000 (right, $15 MILLION), then one percent  is $150,000. Obviously, ten percent fault, would result in a judgment exceeding one million dollars. Consequently, opposing counsel vigorously argued to impose as much responsibilty on my client as possible.
By the way, did I mention that my client had the most insurance coverage?
This was a serious case and at least one of the plaintiffs was terribly injured; however, we were barraged with a multitude of arguments to stack up the fault against our client.
One of those arguments was whether the employer’s review of the DAC report was the best practice. The opposition argued that the employer should have investigated the individual State Department of Motor Vehicle records and even  check  the local court records of traffic citations and criminal convictions. 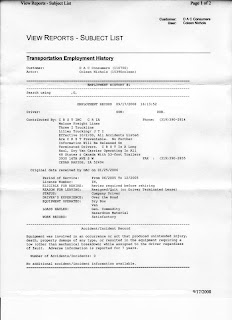 (example DAC Report)
Are you kidding me? Can you imagine how time consuming it would be to check with each State’s DMV for each potential driver? It would be even more time consuming to check each parish/county or municipality in which a driver may have been issued a ticket or pled guilty to a crime! Yet, this is the kind of fallacious argument used to impose unreasonable responsibility on trucking companies under the theory of negligent hiring.
The  Federal Motor Carrier Safety Regulations (FMCSR) specifically permits motor carriers to use third parties as agents to obtain motor vehicle driving records from state agencies responsible for the maintenance of such records.

Plaintiffs cannot legitimately assert that using DAC Services, Inc. (“DAC”) to obtain the motor vehicle records  demonstrates a failure to comply with applicable regulations. Such an assertion is contrary to the plainly stated language of the regulatory guidance and interpretations published and promulgated by the Federal Motor Carrier Safety Administration.
Further, the ridiculous  argument a trucking company did not comply with 49 C.F.R. §391.23 and §391.25 due to its use of DAC, does not have a tendency to make  the determination of a driver’s alleged fault, liability, actions or inactions. Nor does it imply that  hiring, supervising and retaining the driver any more or less probable.
﻿

The Federal Motor Carrier Safety Administration publishes and promulgates the “Regulatory Guidance, Interpretations to answer questions regarding the interpretation and application of the FMCSR. The Interpretations address specific sections of the FMCSR and provide guidance in the compliance necessary to satisfy the mandates of each specific section of the Regulations.
The Interpretations specific to §391.23 and §391.25 clearly state that “driver information services or companies acting as the motor carrier’s agent” or “third party agents” may be used to obtain the driving records of driver-applicants or employee drivers. The Federal Motor Carrier Safety Administration has, by use of the Interpretations, promulgated that it deems the use of information service companies by motor carriers to obtain drivers’ records to be compliant with the requirements of §391.23 and §391.25.
We have also found that plaintiff’s attorneys often look for the criminal records of the driver and attempt to introduce those records as evidence that the employer SHOULD have looked for them. Because had the employer discovered those records (for example of a DWI), they would not have hired the driver.
Okay, let’s get logical here.
First, hundreds or thousands of potential drivers apply for jobs at a given trucking company each year. The productivity of the company would be locked down if it had to look for criminal records in every county/parish and every municipality of every potential driver. The plaintiff’s attorney has the advantage of looking for ONE person’s records after the fact and then arguing that the employer could have done the same thing. Absurd!
Second, the admissibility of the criminal conviction is against the rules of evidence that restrict the introduction of past “bad acts” to prove responsibility in a present situation. In other words, just because a person was driving under the influence in his personal car two years before he was hired by the trucking company doesn’t mean that he did something wrong in the present case.
We all know that the opposition is simply trying to paint the driver and trucking company as a villain.  We must do all we can ensure fair and just treatment of the driver and his/her employer.
Don’t you agree? I would be interested in your thoughts.
Seriously? Trucking Company getting a DAC report is unreasonable?2011-06-092011-06-09https://perkinsfirm.com/wp-content/uploads/2017/01/perklogo-white.pngPerkins & Associates Attorneys at Lawhttps://perkinsfirm.com/wp-content/uploads/2017/01/perklogo-white.png200px200px
Recent Posts
Quick Links
Contact Info
Popular Posts
Material presented on the Perkins & Associates, L.L.C. website is intended for informational purposes only. It is not intended as professional advice and should not be construed as such. The material presented on this site is included with the understanding and agreement that Perkins & Associates, L.L.C. is not engaged in rendering legal or other professional services by posting said material. The services of a competent professional should be sought if legal or other specific expert assistance is required. This website is not intended to be advertising and Perkins & Associates, L.L.C. does not wish to represent anyone desiring representation based upon viewing this website in any state or jurisdiction where this website fails to comply with all laws and ethical rules.
Unfairness of Accident Registers and CSA 2010General
Depositions in a Foreign Country (such as Canada or Mexico)General