The following information may be somewhat outdated so please review recent decisions and statutes on the subject of gross negligence; however, for an overview read on. Please leave your thoughts and opinions too.
There are two basic elements to a claim of gross negligence under Texas law. First, when “viewed objectively from the actor’s standpoint, the act or omission must involve an extreme degree of risk, considering the probability and magnitude of the potential harm to others.”
Second, “the actor must have actual, subjective awareness of the risk involved, but nevertheless proceed in conscious indifference to the right, safety or welfare of others.” Mobil Oil Corp. v. Ellender, 968 S.W.2d 917, 921 (Tex. 1998). Either element can be proven by circumstantial evidence, but evidence of simple negligence is not proof of either. Id.
The first elements reference to “an extreme degree of risk” refers only to “the likelihood of serious injury.” It does not include the “the remote possibility of injury or even a high probability of minor harm.” Id.
Finally, the “actual awareness” necessary to satisfy the second element requires that the actor actually knew of the danger, but subsequent actions or omissions demonstrate disregard. Id.
Punitive Damages? 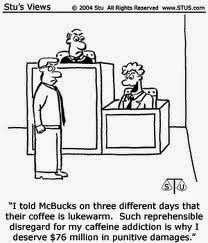 In Texas, punitive damages may be assessed against a corporation for gross negligence, but “only if the corporation itself commits gross negligence.” The grossly negligent act or omission must be directly attributable to the corporation. Id.
A corporation can be held liable for punitive damages (1) “if it authorizes or ratifies” the gross negligence of an employee or agent or (2) “if it commits gross negligence through the actions or inactions of a vice principal.” Id. at 922.
The definition of “vice principal encompasses: (a) corporate officers; (b) those who have authority to employ, ( c) those engaged in the performance of nondelegable or absolute duties of the master; and (d) those to who the master has confided the management of the whole or a department or a division of the business.” Id.
In making the determination whether the acts complained of should be attributed to the corporation, the court must take into account all surrounding circumstances and facts and not just review individual elements or facts. Also, the fact finder is allowed make reasonable inferences from the corporations action/inaction or the facts as they were at the relevant time. Id.
Illustrative Cases
Mobil Oil Corp. v. Ellender, 968 S.W.2d 917 (Tex. 1998)
In Mobil Oil Corporation v. Ellender, 968 S.W.2d 917, 920 (Tex. 1998), the plaintiff Mr. Ellender worked as a contractor for a Mobil refinery repairing and cleaning equipment and in the process was periodically exposed to Benzene. As a result, he later contracted leukemia and died. Id. The Ellender family sued Mobil for negligence, gross negligence, and malice for failure to warn about Ellender about the exposure to benzene and failing to provide protection. Id.
The trial court found that Mobil did commit gross negligence and awarded punitive damages and the appellate court affirmed. The Texas Supreme Court affirmed that there was “legally sufficient evidence of gross negligence to support Mobil’s liability for punitive damages. Id. at 919-20.
Regarding the first objective element of gross negligence, the court concluded that “legally sufficient evidence show[ed] that, viewed objectively from Mobil’s standpoint when Ellender worked at Mobil, Mobil did not warn contract workers about benzene exposure or protect them from it and this failure involved an extreme degree of risk to those workers.” Id. at 922. Specifically, the court found that there was evidence to show that, during the relevant period, it was common knowledge among the petroleum companies that there was extreme risk involved in the exposure to benzene, a fact it established through the testimony of medical safety personnel from Mobil, industry reports and reports from competing petroleum companies. Id. at 922-23.
The court also found support for the second element of gross negligence in that it found vice principals of Mobil had sufficient knowledge of the dangers of benzene evidenced by procedures to actively monitor benzene and screen its own employees for exposure. Id. at 924.
U-Haul International, Inc. v. Waldrip, 322 S.W. 3d 821(Tex. App. August 31, 2010)
In U-Haul International, Inc. v. Waldrip, 322 S.W. 3d 821, 828 (Tex. App. August 31, 2010), the plaintiff suffered injuries while exiting a rented U-Haul truck which allegedly had a faulty parking brake and transmission. The trial court found U-Haul international and U-Haul of Texas negligent and grossly negligent. The appellate court affirmed the finding of gross neligence as to U-Haul of Texas, but found a lack of gross negligence as to U-Haul International and reversed the punitive damage award. Id.
In determining whether any gross negligence could be attributed to the corporation itself to make the corporation liable, the jury was instructed that it must determine that “the person or persons responsible . . . was employed in a managerial capacity and was acting in the scope of that managerial capacity, or [Uhaul International or Uhaul of Texas] authorized the doing and the manner of the act or an employee . . . was unfit and [the company] was reckless in employing him or [the company] or an employee in a managerial capacity ratified or approved of the act.” Id.
Regarding Uhaul international, the court found that there was insufficient evidence of gross negligence in that, under the second element, one employee cited as being aware of or ratifying negligent acts was not a corporate officer and there was insufficient evidence that he qualified as an employee in managerial capacity. In addition, although the other cited employee was a corporate officer, there was insufficient evidence so show that he had any actual prior knowledge of the problems with the brakes or transmission. Specifically, a policy that called for “good repair, but not perfect repair” did not evidence gross negligence. Id. at 845.

As always, our goal is you in your goals to better serve justice. If we can be of assistance, please feel free to contact us at 318-222-2426.

This transmission is not intended to be used by anyone for legal advice. You have not retained our firm to represent you, unless you have signed an engagement letter with us. None of this information should be considered as advising you in any past, present or future litigation. You should always retain the services of legal counsel for the most accurate and up to date advice.

Gross Negligence and Punitive Damages Under Texas Law2014-06-262014-06-26https://perkinsfirm.com/wp-content/uploads/2017/01/perklogo-white.pngPerkins & Associates Attorneys at Lawhttps://perkinsfirm.com/wp-content/uploads/2017/01/perklogo-white.png200px200px
Recent Posts
Quick Links
Contact Info
Popular Posts
Material presented on the Perkins & Associates, L.L.C. website is intended for informational purposes only. It is not intended as professional advice and should not be construed as such. The material presented on this site is included with the understanding and agreement that Perkins & Associates, L.L.C. is not engaged in rendering legal or other professional services by posting said material. The services of a competent professional should be sought if legal or other specific expert assistance is required. This website is not intended to be advertising and Perkins & Associates, L.L.C. does not wish to represent anyone desiring representation based upon viewing this website in any state or jurisdiction where this website fails to comply with all laws and ethical rules.
Hey Westlaw Louisiana’s Non-Compete Statute IS DIFFERENT from the Statute on Employer Immunity Background Checks !General
Isn’t it About Time Defendants Fight Back With Sanctions Motions for Frivolous Claims? Whoa! That May Not Happen!General