Go Ahead: Just Try and Do Something Stupid…

Over and over and over, we see cases in which a car attempts to win the lane against an 18-wheeler. Sure, you may get the lane, but you may lose your life.
It’s been said many times, a fully-loaded tractor/trailer cannot stop quickly so DON’T dart into the path of 18-wheeler. It really annoys me to defend a case caused by a driver who made a sudden lane change and then the driver of the tractor/trailer is accused of following too closely. Often a lazy investigation by the police will make that assumption too.
What about the sudden emergency created by a preceding driver who hits something in the road and doesn’t get off the road and then an 18-wheeler hits them from behind. It’s not always because the driver of tractor was following too closely?
Don’t assume that every “rear-end” collision is the fault of the following driver. Look for the evidence of roadway debris, yaw marks, skid marks, damage to the vehicles. Also, if you are aware of  the accident early enough, look for video surveillance or traffic camera evidence. Remember, that traffic camera footage is not preserved for very long, sometimes only for 30 or 60 days, at most.
Those of us in the profession of defending trucking companies and professional drivers know what to look for when there is a accident. Unfortunately, we are not always called on to assist until a lawsuit occurs. It’s wise to retain counsel immediately because the investigation is protected under the attorney’s work product and privilege.
On final note to those folks driving around 18-wheelers, please stay in front or behind the 18 wheeler. Don’t drive to his side if you can avoid it. There are blind spots.
Also, when driving behind a any vehicle, including a tractor/trailer, DON’T use the old method of following distance of “one car length per every ten miles.” Instead, the minimum safe following distance, on a dry, clean road surface is three seconds (“One-thousand-one, one-thousand-two, one-thousand-three”) .
In three seconds at 60 m.p.h. a vehicle will cover 264 feet. If you use the “car lengths” technique,  and we assume that an average car is 17 feet long, 6 x 17′ = 102 feet. Obviously, you would hit the vehicle in front of you pretty quickly.
The correct “3 seconds” approach gives you over 2.5 times more space and time in which to react safely if something bad happens with the vehicle you are following (whatever type of vehicle it is). The safest following distance requires at least three seconds on a dry road, and…

“this must be increased on any wet road, up to the point where you have doubled it to at least six seconds for a very wet road (i.e. a heavy downpour).”

Following this simple rule and you will not have a bad day, like this person is about to have. 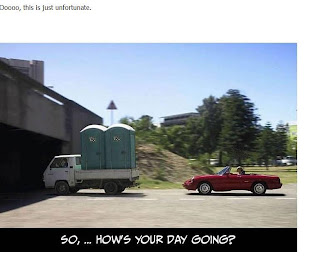 Go Ahead: Just Try and Do Something Stupid…2011-07-212011-07-21https://perkinsfirm.com/wp-content/uploads/2017/01/perklogo-white.pngPerkins & Associates Attorneys at Lawhttps://perkinsfirm.com/wp-content/uploads/2017/01/perklogo-white.png200px200px
Recent Posts
Quick Links
Contact Info
Popular Posts
Material presented on the Perkins & Associates, L.L.C. website is intended for informational purposes only. It is not intended as professional advice and should not be construed as such. The material presented on this site is included with the understanding and agreement that Perkins & Associates, L.L.C. is not engaged in rendering legal or other professional services by posting said material. The services of a competent professional should be sought if legal or other specific expert assistance is required. This website is not intended to be advertising and Perkins & Associates, L.L.C. does not wish to represent anyone desiring representation based upon viewing this website in any state or jurisdiction where this website fails to comply with all laws and ethical rules.
Depositions in a Foreign Country (such as Canada or Mexico)General
Duty to Prevent a CrimeGeneral