I know, the first thing an attorney will say is that Carmack does not apply to bodily injuries; it only applies to cargo damage.
Guess what? You’re wrong! It’s okay though, you’re not alone.
I scoured the nation and abroad for anyone who had dealt with this issue. Very few people have, but thanks to Marianne Sauvey, I was directed to some little known cases that apply the limitations of Carmack to personal injury claims.
Obviously, the factual scenarios will be very narrow: the claimant must have an injury directly related to the cargo delivery and not to an accident causing the release of hazardous cargo. Let me expound on that point. Suppose a truck driver is involved in accident in which he was driving too fast, hit the rear of another vehicle and caused the release of hazardous chemicals injuring bystanders, then the Carmack exclusions and limitations would not apply because the negligence pertains to driving and involves parties unrelated to the shipper or receiver.

Some disagree with me and argue that Carmack would still apply, but try to win that argument with a local judge.

On the other hand, let’s suppose that the delivery of hazardous chemicals  caused an injury to a recipient of the cargo? Suppose the driver did nothing out of the ordinary in route, but the cargo was apparently was damaged in route anyway. Would the Carmack exclusions apply?

By the way, there was a very interesting argument in this case that I will address in another blog:

If the driver smelled something unusual when he opened the trailer and failed to stop the delivery or call some state or federal agency did he breach some duty under any state or federal regs?

I will cover that another time. Let’s continue discussing Carmack.

The 1906 Carmack Amendment to the Interstate Commerce Act was meant to eliminate the negative effects on interstate commerce stemming from conflicting state laws regarding the relationship between interstate shippers and carriers. Taylor v. Mayflower Transit, Inc., 22 F. Supp. 2d 509, 510 (W.D.N.C. 1998). The Amendment States:

Adams Express Co. v. Croninger, 226 U.S. 491 (1913) dealt with the scope and effect of the Carmack Amendment on the previous patchwork of state laws regulating interstate carrier liability. Previously, carrier liability in interstate shipments was enforced under either federal common law or various public policy considerations of the several states.
The Carmack Amendment’s preemption of state action has been extended beyond mere physical damage to property being shipped.
In Tayloe v. Kachina Moving &Storage, Inc., 16 F. Supp. 2d 1123 (D. Ariz. 1998), the plaintiff’s relocated from Illinois to Arizona for employment reasons. Plaintiff’s employer arranged for Mayflower transit to transport plaintiff’s belongings to Arizona and placed them in long term storage, until the plaintiff’s moved into their new home. Later, Mayflower issued a bill of lading covering the transportation of the plaintiff’s goods. The goods were then transported and placed in a storage facility in Arizona maintained and owned by defendant, Kachina. Upon delivery of the items to the plaintiff’s Arizona home, plaintiffs alleged that certain items were missing and damaged by water and mold. In addition, exposure to the mold allegedly resulted in a severe allergic reaction requiring hospitalization of plaintiff Vicki Tayloe.
The plaintiff’s filed suit containing multiple allegations including claims of personal injury by Vicki Tayloe. In a pretrial dismissal of the plaintiff’s case, the court reiterated that “[t]he Carmack Amendment preempts all state law claims arising out of the interstate transportation of household goods by a common carrier. The court found that all of the plaintiff’s claims, including the personal injury claims, arose out of the transportation of plaintiff’s goods across state lines from Illinois to Arizona and, as such, were preempted by the Carmack Amendment.
Likewise, Strike v. Atlas Van Lines, Inc., 102 F. Supp. 2d 599 (M.D. Pa. 2000), involved the transport of plaintiff’s belongings, including  a pickup truck in defendant’s moving van. While in transport, the gas tank of the plaintiff’s pick up ruptured and gasoline spilled into the van contaminating plaintiff’s belongings. When the contaminated boxes of belongings were moved into the plaintiff’s home, both plaintiffs were forced to obtain medical treatment from exposure to gasoline fumes. The plaintiffs filed suit for damages, including personal injuries and loss of consortium.
The court specifically stated that preemption under the Carmack Amendment extended to personal injury claims stemming from “changes made to shipped goods through the negligence of the carrier . . . .”

Because the plaintiff’s injuries resulted from damage to their property during interstate shipment, their claims were not sufficiently separate from the damage to the goods in order to escape the reach of Carmack’s preemption.  Also, you may want to see  the discussion in footnote 2 of Kashala v. Mobility Services Intern., LLC, 2009 WL 2144289 (D.Mass. 2009) (unreported). See also McGinn v. J.B. Hunt Transport, Inc., 2010 WL 4363419 (E.D.Wis. 2010) (slip copy).

Well, what if the injury is not to the “shipper”, but someone on the receiving end (the “consignee” in trucking lingo). No problem. Courts have recognized the extension of the Interstate Commerce Act and the Carmack Amendment to parties other than the shipper.

Harrah v. Minn. Mining and Mfg. Co., 809 F. Supp. 313 (D.N.J. 1992), involved a suit filed by a recipient and legal owner of photographs shipped by 3M. The court stated that, if the plaintiff had any right to sue, it must arise under the Interstate Commerce Act.  The court observed that persons to which the right to sue had been extended included not only shippers, but also buyers and consignees because the definition of a consignee provided in Black’s Law Dictionary:

“one to whom the carrier may lawfully make delivery in accordance with the contract of carriage.’”

Under this definition, the court concluded that the plaintiff would have a right to sue ONLY under the Interstate Commerce Act. Though the court ultimately determined that the plaintiff could not maintain his suit due to his non-compliance with the shipping contract, id. at 318-19, the court’s opinion demonstrates that the reach of the Interstate Commerce Act,  Carmack Amendment, extends beyond the rights of the shipper to other parties involved in the shipping transaction.

So you say, what’s the big deal whether a person can sue under a state law cause of action or whether he MUST sue under Camack? Glad you asked that.

Carmack limits the scope of damages to what is allowable by statute (usually a specified dollar amount based on the weight of the cargo)  and precludes ALL claims under state law, such as mental anguish, pain and suffering, lost wages, loss of earning capacity, medical expenses. Now, you get the picture.

In our case, the circumstances surrounding the plaintiff’s exposure were the result of an integral part of the transaction of goods in interstate commerce. This was  not simply a case where the supposed negligence of a common carrier resulted in some accident which injured bystanders having no connection to the shipper, recipient, or carrier.
The plaintiff was an employee of the Chemical company receiving the cargo and he was acting in the course and scope of his employment at the time he was exposed. It would have been  impossible to contend that the delivery to the consignee did  not constitute  and integral part of the transaction in interstate commerce. Since the Carmack Amendment preempts all state law claims arising from the transaction of goods in interstate commerce, the plaintiff’s  state law claims against the trucking could not survive.
As always, there are practical problems of proof in cases like this. So before you go out there and make some half-cocked argument about applying Carmack to every personal injury claim associated with cargo, let’s remember some important points: 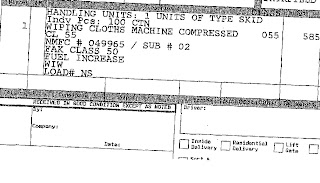 So these are just a few thoughts on the issue. What do you think? I would love to hear your counterarguments, if you have any.﻿
* Special thanks and recognition to Whitney Morgan, Andy Sievers and Chris Baker in providing information for the blog.
Carmack Excludes Personal Injury Claims, Right?2011-06-292017-05-04https://perkinsfirm.com/wp-content/uploads/2017/01/perklogo-white.pngPerkins & Associates Attorneys at Lawhttps://perkinsfirm.com/wp-content/uploads/2017/01/perklogo-white.png200px200px
Recent Posts
Quick Links
Contact Info
Popular Posts
Material presented on the Perkins & Associates, L.L.C. website is intended for informational purposes only. It is not intended as professional advice and should not be construed as such. The material presented on this site is included with the understanding and agreement that Perkins & Associates, L.L.C. is not engaged in rendering legal or other professional services by posting said material. The services of a competent professional should be sought if legal or other specific expert assistance is required. This website is not intended to be advertising and Perkins & Associates, L.L.C. does not wish to represent anyone desiring representation based upon viewing this website in any state or jurisdiction where this website fails to comply with all laws and ethical rules.
Foul Odor from the Cargo: What’s a Driver’s Duty?Cargo Issues, Litigation